What's driving markets lower and what should investors do?

It's been a tough couple of weeks in the markets and I think the reasons are best summed up by Bloomberg’s “Wall of Worry”. 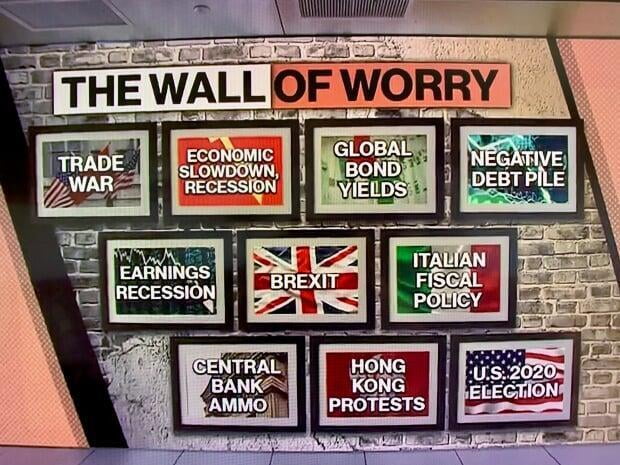 There’s a lot of legitimate issues here and since I can’t address everything, I want to focus on what binds all these headlines together, fear. It can be difficult to measure emotions as you often have to rely on surveys, which is really just what people are saying. As we all know, “actions speak louder than words”, so what are investors actually doing?

This leads us to the current stampede into the perceived safety of bonds, which has pushed yields to record lows. The yield to maturity of the Canadian bond index is now below 2%, which means if you buy a bond and hold it to maturity that's the most you can make (you can make less if the issuer defaults). In Europe, more than half of government bonds are trading at a negative yield. This means investors are paying the government to hold their money. Obviously, this shows that most investors right now are fearful, not greedy, and as Warren Buffett famously said,
“be fearful when others are greedy and greedy when others are fearful.”

Bonds are still useful for diversification; they may be the only investment to perform well if we enter a deflationary debt spiral. That said, when the average balanced portfolio puts roughly 40% in bonds, an asset class that mathematically can't do better than 2%, that really drags down long-term performance and could result in permanent capital impairment if inflation picks up. This is why we continue to diversify the income side of our portfolio’s and remain overweight in high yield bonds, preferred shares, senior loans and mortgages.

I will concede that these alternative income investments represent greater credit risk, and likely more price volatility, but they come with higher yields (~6%), less inflation risk and interest rate sensitivity. Remember, volatility is not risk, true risk is the probability of missing your financial goals. In all but the most pessimistic economic environments, investors will be unlikely to meet their goals with the 2% yield on traditional bonds or cash. By this measure, holding money in bonds or cash represents the greatest risk of missing your financial goals.

That’s enough about fear, greed and investor sentiment, now let’s talk about economics. There are legitimate reasons why many of the issues on the “Wall of Worry” will be resolved. First of all, about half of the issues are political, and politicians don’t stay in power forever. Even if you’re ‘president for life’ Xi Jinping, eventually economic pain forces politicians to capitulate. The other issues are due to a slowing economy, which we believe will re-accelerate in Q4 due to the added stimulus from central banks (Fed cutting rates, China too, ECB likely to cut in September). Inflation remains low which gives policy makers room to cut rates even further if needed. As short-term rates are cut and the economic data improves, the inverted yield curve that investors are so stressed out about will normalize.

While this is the most likely scenario, there certainly is a chance we're wrong and that's the point of diversification. You position portfolios for what is most likely to happen, but you prepare for the worst-case scenario. In conclusion, as bad as the headlines are right now, the best strategy is to stay invested in a properly diversified portfolio.
Categories -
Newsletter
Share -
Tags -

Shouldice Wealth Ltd. is a registered Portfolio Manager in Alberta. Cash and securities held in your account are protected up to $1,000,000 CAD. Visit CIPF to learn more.