A Broad Based Recovery

2020 was a roller-coaster for investors who experienced one of the sharpest contractions and subsequent rebounds in history. Looking back, it’s easy to forget just how scary March was and think the subsequent recovery was obvious and predictable, but hindsight is 2020 (sorry, I couldn’t resist). Future investors looking back at 2020’s returns might think it was a pretty normal year. After all the dust settled, every major asset class was up.

While the real economy continues to struggle, markets are forward looking and have priced in a significant recovery. Most of the recovery thus far has come from manufacturing while services have lagged due to their reliance on face-to-face contact. As we approach herd immunity, services should catch-up. Current projections suggest herd immunity will be reached in the US by summer 2021 while other developed countries are likely to get there in the fall. 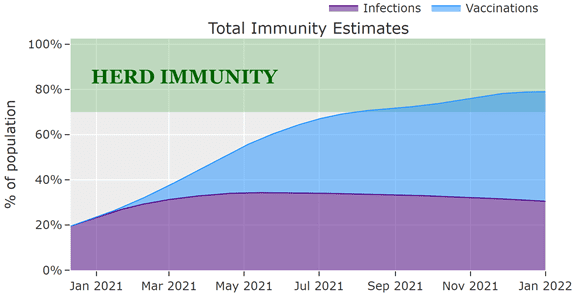 Once we achieve herd immunity, we expect an extremely strong economic recovery. Government stimulus has created excess savings and strong personal balance sheets as households have used this crisis to pay down debt. This means consumers will be able to, and based on surveys are excited to, return to normal and make up for lost time. This means a massive boom in spending. Many investors are now expecting the recovery could mimic the roaring 20s, which followed WWI and the Spanish flu. This is something we wrote about near the market bottom on March 21st (Link).

RISKS TO A BROAD BASED RECOVERY

The most significant risk is a rapid rise in interest rates, but this seems unlikely until 2023 and beyond. Initially the recovery will lead to modestly higher interest rates, which is a good thing. As the recovery broadens and accelerates, inflation is likely to rise above central bank targets, forcing them to raise interest rates more dramatically. This will be a major problem for massively indebted Governments and expensive risk-assets. As such, we will be watching inflation closely.

We have pre-emptively positioned portfolios in asset classes that do well in a rising inflation environment. On the income side of portfolios, we favor variable rate and short-term debt which will move up with rising interest rates. For equity, we are underweight the US which is most at risk of rising inflation and has already seen 10-year inflation expectations rise to a 2 year high of 2.2%. This is due to a weakening dollar boosting import prices, huge fiscal deficits (likely to be higher now with democrats controlling all 3 houses) and an exceptionally dovish Fed that expects to maintain the policy rate near zero until at least 2023.

While there are no other obvious impediments to a strong broad based recovery, investors have largely embraced this narrative. Most of the good news is priced in, and whenever there is a strong consensus in financial markets it doesn’t take much to create a sizeable pullback. What might trigger this is anyone’s guess but the only prudent way to shelter yourself is through diversification and avoiding bubbles, which is at the core of our investment strategy.

ARE WE IN A BUBBLE?

The dichotomy of rising asset prices amidst weak underlying economic growth has prompted some investors to ask if we are in a bubble. Robert Schillers checklist to diagnosing a bubble is similar to a psychologist diagnosing the mental health of a patient. Think about an investment (asset class, region or individual security), then ask yourself the following questions:

If you answered yes to all 7 of these, the investment is likely in a bubble. That said, we don't know if or when the bubble will burst. In fact, only about half of all bubbles burst, but when they do the results can be catastrophic. The other half deflate slowly by underperforming over a long period of time. In my opinion, there's a couple contenders that check most of these boxes. Long-term bonds (particularly governments), large cap US growth stocks (particularly Technology) and Bitcoin.

Whenever you have an asset class that busts, investors tend to move away from it and underappreciate it for an extended period of time. This happened with tech following the 2000 dot-com bust where share prices were essentially flat for over a decade. Financials have been in a similar position since the 2008 financial crisis. We expect the next decade will show financials and value stocks outperforming while tech and growth stagnate and underperform.

Some observers have noted that technology has outperformed due to rising earnings, which is true, but it’s only half of the story. The other half is a rise in valuations. We expect these companies will continue to do well, but valuations will eventually revert back resulting in underperformance. Remember that some of these earnings have been pulled forward from future years. For example, if you didn’t sign up for Netflix or Amazon Prime during the pandemic, you’re probably not going to in the next few years. As such, these companies will struggle to grow at the same pace and will face difficult year-over-year comparisons in 2021, which could be the trigger for valuations to normalize.

So, if certain parts of the market are likely in a bubble, what’s an investor to do? Traditionally bonds offer the best protection, but with yields in every major market on the floor, investors can’t expect bonds to add value during the next crisis. We’ve seen this already in Europe where yields were already on the floor going into the pandemic and remained flat through it. With paltry yields and the risk of inflation rising, bonds are an expensive and ineffective portfolio insurance. As such, our preference is to hold risk assets, but focus on cheaper, underappreciated portions of the market.

Emerging markets, of which two thirds is China, South Korea and Taiwan, have already returned to trend growth and as seen in the chart below are expected to continue their growth in 2021. Meanwhile, most developed economies have only partially recovered. Despite this fact, emerging markets only began to outperform recently, but with low relative valuations and higher growth rates they are well positioned for continued outperformance. China was the only major economy to record positive real GDP growth in 2020 (1.9%) and are expected to grow by 8.2% (IMF forecast) in 2021. 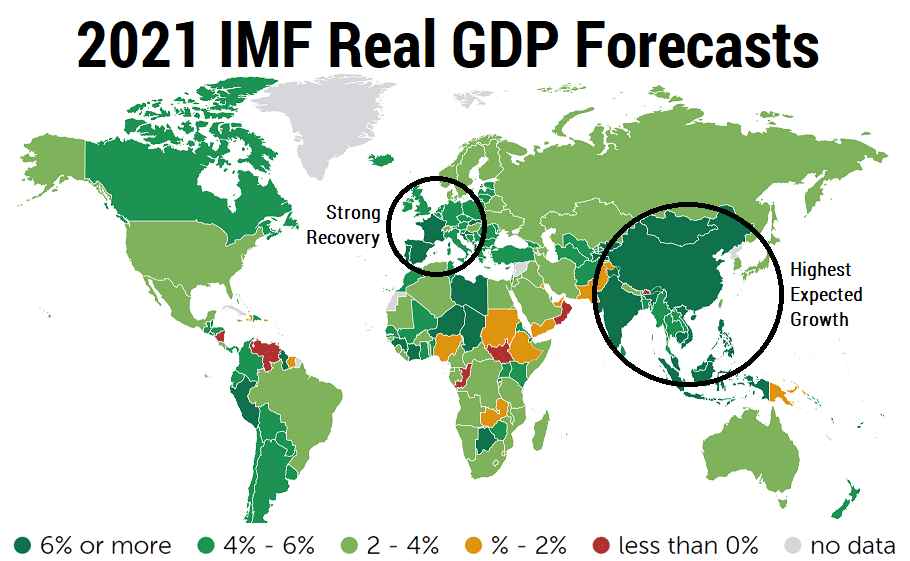 While our preference for emerging markets is based on strong fundamentals, there is further upside potential from a spillover of speculative fervor affecting the assets discussed previously. In China, investors have to contend with capital controls which makes it difficult to invest globally. As such, Chinese investors primarily invest in either the Chinese stock market or their real-estate market. Since the government is so focused on avoiding another real-estate bubble (their messaging being, “housing is for living not for speculating”), any speculation is likely to go towards the stock market.

We’ve seen glimpses of this already but expect much more to come as the global recovery solidifies demand for Chinese exports. Trade should accelerate as well since China - US tensions are likely to have a temporary truce under Biden. This is due to the democrats preference for a multi-national approach to trade policy and the US will be busy rebuilding relationships with allies before leveraging those relationships to pressure China.

As vaccines are disseminated, all countries should bounce back to trend growth.

This will support a broad based recovery benefiting asset classes that have so-far lagged including cyclicals, value stocks and non-US stocks. Non-US needs trade growth to outperform, but a broadening recovery, falling US dollar (chronic deficits) and more trade-friendly US leadership (Biden) should allow this to happen.

Within value stocks the largest weight is Financials, which will do well as the economy recovers since loan-loss provisions come down. This makes intuitive sense as a stronger economy means less bankruptcies. Furthermore, financials will benefit from rising long-term interest rates. In essence, banks “borrow” from consumers who deposit into chequing accounts and pay them low short-term interest rates, then they lend at much higher longer-term rates. As this differential increases, so will profits.

Europe should disproportionately benefit from a vaccine due to reliance on trade and tourism. With an older population they have been more willing to use lockdowns to control the spread, so the economic and health impacts of COVID-19 are more severe. Meanwhile, Japan has been haunted by deflation for 30+ years. Given our expectation for inflation to rise and their historically low valuations Japan looks attractive. Possibly they are the best inflation hedge for the next decade. We expect to increase our exposure to the euro area and Japan as opportunities arise.

To summarize, most headlines and investor attention has been focused on a select few asset classes that have benefited from the pandemic and speculative fervor. Recently a rotation has begun into the hardest hit, most under-appreciated corners of the market. We believe these offer far better returns and lower risk for long-term investors and have positioned portfolios accordingly.

If you have any questions, comments or would like to become a client please do not hesitate to reach out. You can email us at info@shouldicewealth.com or schedule a free 30 minute consultation using the link below.