2020 has taken investors on a record setting roller coaster with the S&P 500 experiencing the fastest 30% correction in history, followed by the largest 50-day rally in history.

While we were caught off guard in the initial sell-off, diversification softened the blow and provided us the opportunity to sell safer investments (like bonds) in mid-march to buy more risky assets (like stocks) at huge discounts. On March 20th, the day before markets bottomed, we put out a market update advising investors to “Put Cash To Work: Investors with more than a year to invest would be wise to put cash to work now instead of waiting for the dust to settle. If we wait to see signs we’re winning the war against COVID-19, or that an end is in sight, we may have already missed out on considerable upside.” As you can see in the chart below, this is exactly what has transpired.

The reason I bring this up is to highlight some fundamentals on how markets work, specifically:
Markets originally shrugged off COVID-19, expecting it would be contained like the virus’s that came before it (SARS, MERS, H1N1, Ebola, Zika, etc.). As such, markets viewed the probability of uncontrolled global spread as low. Unfortunately, by February 19th cases outside China reached 1,000 and 12 countries had identified double digit case numbers. Market’s began to sell-off, a full 3 weeks before governments would react with lockdowns and other measures. So, markets saw this coming and moved quickly to price it in, which begs the question, what is being priced in now? After all, the current data is dismal as we’ve surpassed 10,000,000 cases, unemployment has gone up double digits, all while debt and deficits are exploding.

Fiscal stimulus (i.e. Government spending) around the world has been massive, currently totaling ~$10 trillion. While the magnitude varies considerably (see chart below), overall it represents nearly triple the amount of stimulus as we saw in 2008. 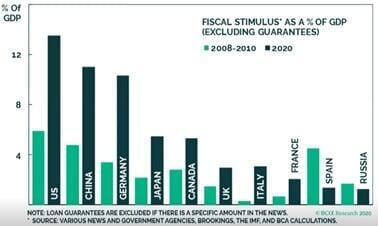 When this crisis began we compared it to a world war, and nothing blows a hole through government budgets like wars. In fact, budget deficits right now are slightly more than WWI, but not yet as bad as WWII. That said, total debt to GDP was higher going into this crisis than it was going into WWII and deficits could rise further if there is a second wave or the economy stumbles again.

Monetary policy has also been extremely accommodative as 95%+ of global central banks are stimulating. Furthermore, banks across the globe have more capital now than they did in 2008. When combined together, Fiscal and Monetary stimulus in the U.S. is equivalent to 35% of GDP while the global average is closer to 15% of GDP. While this has been necessary and is a big reason for the market’s continued recovery, there are some long-term negative repercussions for the record setting mountain of debt we’ve accumulated. 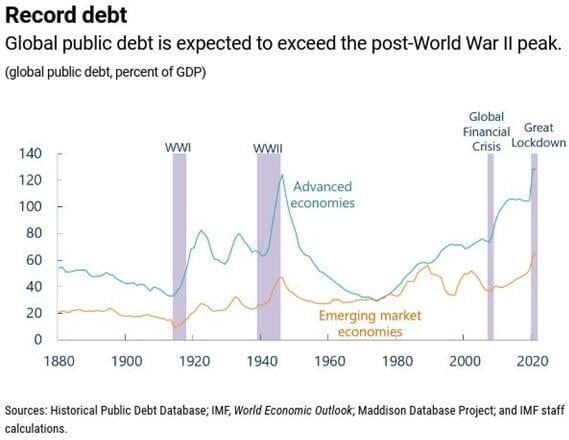 Currently this debt is not a major issue because interest rates are so low. Central banks are likely to keep interest rates low until they are forced to change course, like if we saw rising inflation.

While there is a lot of talk about potential inflation, make no mistake, the main concern for markets during this crisis is deflation. There has been a massive drop in demand as economies shut down, meanwhile supply only suffered a temporary hit and is coming back online as countries like China reopen. When you have steady supply and falling demand, you get declining prices (i.e. Deflation). This is a big reason why central banks are happy to print money, there’s little to no risk it will lead to inflation, at least until the economy recovers.

Pandemics typically follow a V-shaped recovery. We’ve seen a sharp decline in economic activity, but it should not be prolonged. Why do we expect a sharp recovery? With the exception of government debt, we’ve entered this crisis in better shape than we typically enter into a crisis. Bank and consumer balance sheets are stronger and there are less excesses in the system. Also, we’re seeing pent up demand as people and companies seem to be delaying major purchases instead of cancelling them entirely. We’ve seen this in China which was the first country impacted by COVID-19 and the first to exit the crisis. China data shows they have already achieved a V-shaped recovery. That said, the recovery has not included a boost on consumer spending as people remain fearful.

Following the initial bounce back, the second part of the V-shaped recovery is a vaccine. There are currently 18 vaccines globally that have entered human testing with an additional 129 in development. Our base-case continues to be that a vaccine will be approved and widely distributed by summer 2021. While this would represent the fastest vaccine development in history, there is a more optimistic case that hinges on accelerating Phase-3 trials and manufacturing. Specifically, Phase-3 trials are large-scale safety and efficacy. This typically means getting a very large sample (10,000+) of individuals where half get the vaccine and half don’t. Then you wait for them to come into contact with the virus during their daily lives, which is why you need a large sample and time.

Alternatively, Phase 3 could be sped up by asking for (or financially compensating) individuals to get the vaccine, then be willingly exposed to the virus. There are already over 30,000 volunteers who expressed interest in doing this at 1daysooner.org. Obviously, this comes with a lot of ethical and moral questions, but drastic times call for drastic measures. Furthermore, funding has been pouring in to allow vaccines with promising Phase 1 and 2 results to begin ramping up production immediately. This means if they are eventually approved, we will already have significant inventory to accelerate deployment.

For a couple years now, we’ve had a preference for emerging markets due to higher growth rates, reasonable valuations, better demographics, technological/productivity catch-up, etc. That said, we did have some concerns as to who would benefit from this. Would it be local companies, or large multi-nationals? With the ongoing trade war and COVID-19 accelerating the de-globalization trend it seems more likely now that local growth will benefit local companies, with the possible exception of online/tech companies.

This is one reason the U.S. outperformed last decade, as U.S. companies grabbed a growing share of the largest consumption economy. Unfortunately for the U.S., this has come at the cost, as their trading partners have pulled back from the U.S. in-kind. Going forward global consumption growth will largely be driven by emerging markets. Their standards of living are currently low, and as they grow and create wealth they will look to enhance their quality of life through more consumption. In short, emerging markets will continue to drive global growth and de-globalization ensures they will be the prime beneficiaries.

The other effect of de-globalization is that it likely results in rising inflation. As countries and companies begin to focus on resiliency of supply chains instead of efficiency, they will undoubtedly find goods and services more expensive to produce. These costs will get passed along to consumers in the form of higher prices, something we’re already seeing at the grocery store.

PUTTING THE PIECES TOGETHER

Governments are spending, racking up wartime deficits and accumulating record setting debt while central banks stimulate to fight off deflation. This is likely to continue until we have a vaccine putting a floor on asset prices as any bad economic news will likely be met with increased stimulus measures.

Once we get a vaccine, we expect demand will come roaring back. Meanwhile, supply could be slow to catch up given the massive damage done to supply chains as a result of this crisis and the ongoing de-globalization trend. As a result, inflation seems likely, which will be welcomed by central banks (who fear deflation) and governments (who have few options to get out from under their massive debt loads). This is not just speculation, it is precisely what happened after WWII. In the U.S., with massive government debt and soldiers returning to rebuild their lives, inflation temporarily spiked as high as 20% before returning to pre-war levels.

While we’re not predicting double digit inflation, even a modest uptick could force a significant repricing of assets. Remember from the beginning of this commentary that markets are forward looking, probabilistic and quick to react. As such, we don’t have to see high inflation, just the risk of it rising in the future is enough to move markets.

Make no mistake, inflation is a good outcome and far better than the alternative (depression and deflation). That said, investors need to be prepared as inflation affects asset classes in vastly different ways. Why does inflation matter so much? When markets price an asset they are trying to determine the present value of future cash flows. The discount rate you use is heavily affected by inflation. With this in mind, we’ve made the following tactical moves in our clients’ portfolios.